With the imminent opening of The Great Park tennis facility in Irvine, Orange County, where the Brymer Lewis Tennis Academy will be establishing high-intensity development programs to maximize young players' chances of actualizing their full potential, it is only fitting that our initial post expounds on our coaching philosophy.

The Chuck Brymer Chris Lewis coaching philosophy recognizes that every tennis player, no matter what age, is a unique individual. It is this fundamental tenet that gives rise to our individualistic approach to coaching players. In contrast to a 'coaching by numbers' methodology, the individualistic approach to coaching is a reality based method that recognizes all players possess different physical and mental attributes. Given that this is an indisputable fact, our reality-based, individualistic philosophy should be as uncontroversial as it is self-evident. It is decidedly not. Of course, nothing could please Chuck and me more.

"Why is this?", I can hear you ask. You see, with our customized, collaborative approach to player development, one which recognizes that tennis is a game of contrasting styles and differing personalities, and that each player's game should best reflect his or her personality, it separates us out from those who subscribe to a regimented, inflexible methodology whose hallmarks are conformity and uniformity.

To concretize my point, if you were to stand on a balcony and observe a number of players, many of whom we've coached, you would not be able to identify whose students were ours as their playing styles would be unique. On the other hand, there are many coaches whose students would be easily identified as they would be products of a methodology that began with a blueprint or mold of the 'ideal player' and into which there would be an attempt to fit each student.

For instance, any coach who took Rafael Nadal as the ideal player and then attempted to coach every student to play like Rafa, to the extent that coach was 'successful' would be the exact extent to which that coach's players would be identifiable. Can you imagine, though, the end result if such an attempt had been made to clone a young Nick Kyrgios into a Rafa, or a developing Pete Sampras into a Bjorn Borg, or any young player whose personality and temperament didn't suit the style being forcibly imposed on him? Unfortunately for those payers who have become the unwitting victims of such an approach, one doesn't need to imagine, because the actual wreckage is everywhere.

And although Chuck and I are not pleased that this is happening to many players who have had their enormous potential sabotaged by well-meaning but misdirected coaches and their flawed philosophies, we are pleased that with the opening of the Brymer Lewis Tennis Academy at the Orange County Great Park in Irvine, we are now ideally positioned to help those, or any, players looking for a high-intensity tennis environment within which they can develop a game that best suits them.

On that note, Chuck and I invite you to discuss any aspect of our coaching philosophy and how it might relate to you and your game. Whether you agree or disagree with us, we promise to make the discussion stimulating. Being such an individualistic sport, tennis invites diversity of opinion. And in that spirit, we would like to hear yours. 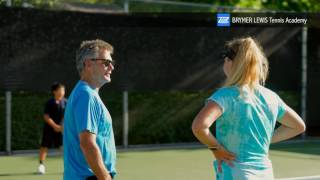